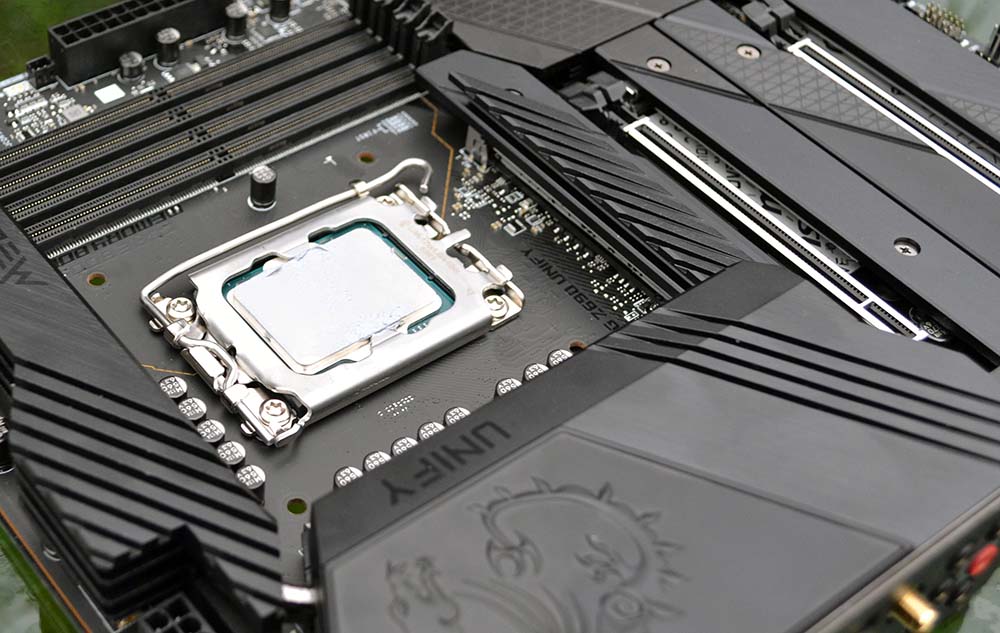 MSI is carving out a niche in a congested, RGB-laden market with its line of Unify motherboards. Bringing black back into fashion by eschewing lighting that has become all too familiar, the latest model is designed to house Intel’s all-new 12th Gen Core processors.

You would expect so, too, as the £500 asking price is very much at the premium end of the market. As before, we’ll point out areas where the board does well and others where, for the price, it ought to do more.

Heatsink coverage around the CPU area is fantastic. Build quality is excellent on the two heatpipe-connected slabs of aluminium, and though no Core i9-12900K ever needs so much power, MSI uses a 20-phase supply (19 reserved for the CPU) capable of delivering almost 2,000A. Think about that for a second; at 1.1V that’s over 2,000W of power – we would struggle to hit more than 350W under load with a very competent AIO cooler. Still, enthusiasts tend not to shy away from excess, and to that end the board is noticeably heavy as it features a rear-sided brace for extra rigidity.

MSI also goes big on M.2, with Unify including five slots. Three reside around the two PCIe x16 slots and a further two underneath the extra-wide heatsink at the bottom. The top one is preferred as it runs at PCIe 4.0 x4 from the CPU; the next two manage the same speed but are tied to the Z690 chipset, while the final pair are interesting as one is PCIe 4.0 x4 and the other PCIe 3.0 x4. Only the third slot down is the longer 22110 form factor – everything else is limited to the more common 2280. MSI deserves credit for having dual-sided heatpads for every slot, along with ‘Easylock’ mechanisms for the top three.

Compared to its peers at around the same price point, Unify is generally strong. Being picky, Asus does marginally better in terms of audio and, like ASRock, has baked-in support for Thunderbolt 4 on the I/O section. This board is most similar to the Gigabyte Z690 Master, which is around £50 less.

It’s odd that MSI completely ignores outputs from integrated graphics, which no other board in our mini-line-up does, and it’s an oversight as most latest-gen Intel chips have options for an IGP. Such an observation is particularly relevant given the lack of discrete cards on the market; you may have to start with integrated and wait for that shiny Radeon or GeForce to arrive.

MSI chooses dual Intel 2.5G NICs – a wise move – and augments with Intel WiFi 6E. That’s a good combination and we favour it over all others that are listed.

Overall, MSI hits a reasonable balance between features and cost. We’d recommend fitting a display output and, at a stretch, Thunderbolt 4 on the rear. These two features will move the Unify from solid to outstanding from a specification point of view. MSI does have the £600 MEG Ace for this very purpose, though.

MSI’s firmware remains Click BIOS 5. It’s generally okay but still has a few foibles that we don’t like. The first is that one needs to reboot to flash the BIOS. A second concern is the overly nested nature of some of the options. We reckon it takes longer to become au fait with this firmware than, say, the Asus one.

It’s all personal preference, of course, and getting our test system configured exactly right doesn’t take too long.

DDR5 is somewhat strange insofar as it offers plenty more bandwidth than DDR4 – at JEDEC speeds – but suffers from poor latency access. This means performance may not be stellar in situations where there is demand for lots of small external memory accesses, but ought to be great if the requested memory streams for a while.

MSI matches the performance of the Asus DDR5 board easily enough. Do be aware that getting hands on a DDR5 kit may prove very difficult as there’s a severe ongoing shortage.

The hallmark of a well-tuned Z690 board is the ability to achieve 2,000 marks in the single-threaded Cinebench R23 test when using a Core i9-12900K. The MSI is the first to do so.

As DDR5 modules continue to be in constraint, do understand very little performance is lost if opting for a Z690 DDR4 board equipped with low-latency memory. Food for thought.

Gaming performance at 1080p is very close between the MSI, Asus and ASRock. Going by our examination of the chip itself, this translates to top-tier subsystem throughput.

Each board has its own interpretation of what long-term power means on a Core i9-12900K. MSI cranks up the CPU package power to around 240W, which is naturally very close to the purported 241W limit imposed by Intel.

Using preset parameters, we observe little difference in overclocking potential. The CPU appears to have a hard limit of all-core 5.1GHz at 1.4V, irrespective of board. Putting this into context, CPU-only power draw is ‘only’ 325W, which is about one-sixth of the MSI’s VRM potential. To be blunt, it is not the motherboard’s electrical capability getting in the way.

Maximum memory speeds are predicated by the modules used, and as expected, DDR5 scales higher on the MSI and Asus models. Putting it all together, the MEG Unify scores well in the overclocked tests.

Having lots of Z690 boards in a line-up causes motherboard companies to look at novel solutions catering for each price point. £500 nets the enthusiast a premium board from the big four producers.

The MSI MEG Z690 Unify is interesting for a couple of reasons. It completely eschews onboard RGB for a lovely, clean look, though addressable headers allow for some form of user-added lighting. The second is a lack of video outputs on the I/O plane. MSI will argue anyone contemplating a board like this will opt for a discrete card, but it wouldn’t have cost much to install DisplayPort or HDMI, would it?

Compared to its price peers, Unify is very good for M.2 coverage and cooling, has the best networking combination, decent USB support and audio.

Verdict: The MSI MEG Z690 Unify is a sleek-looking board that needs to add Thunderbolt 4 and the aforementioned video outputs for it to be elevated from good to great.

Lack of video outputs
No Thunderbolt 4

MSI MEG Z690 Unify Review Jump to: Comparison | Performance | Overclocking | Conclusion MSI is carving out a niche in a congested, RGB-laden market with its line of Unify motherboards. Bringing black back into fashion by eschewing lighting that has become all too familiar, the latest model is designed...