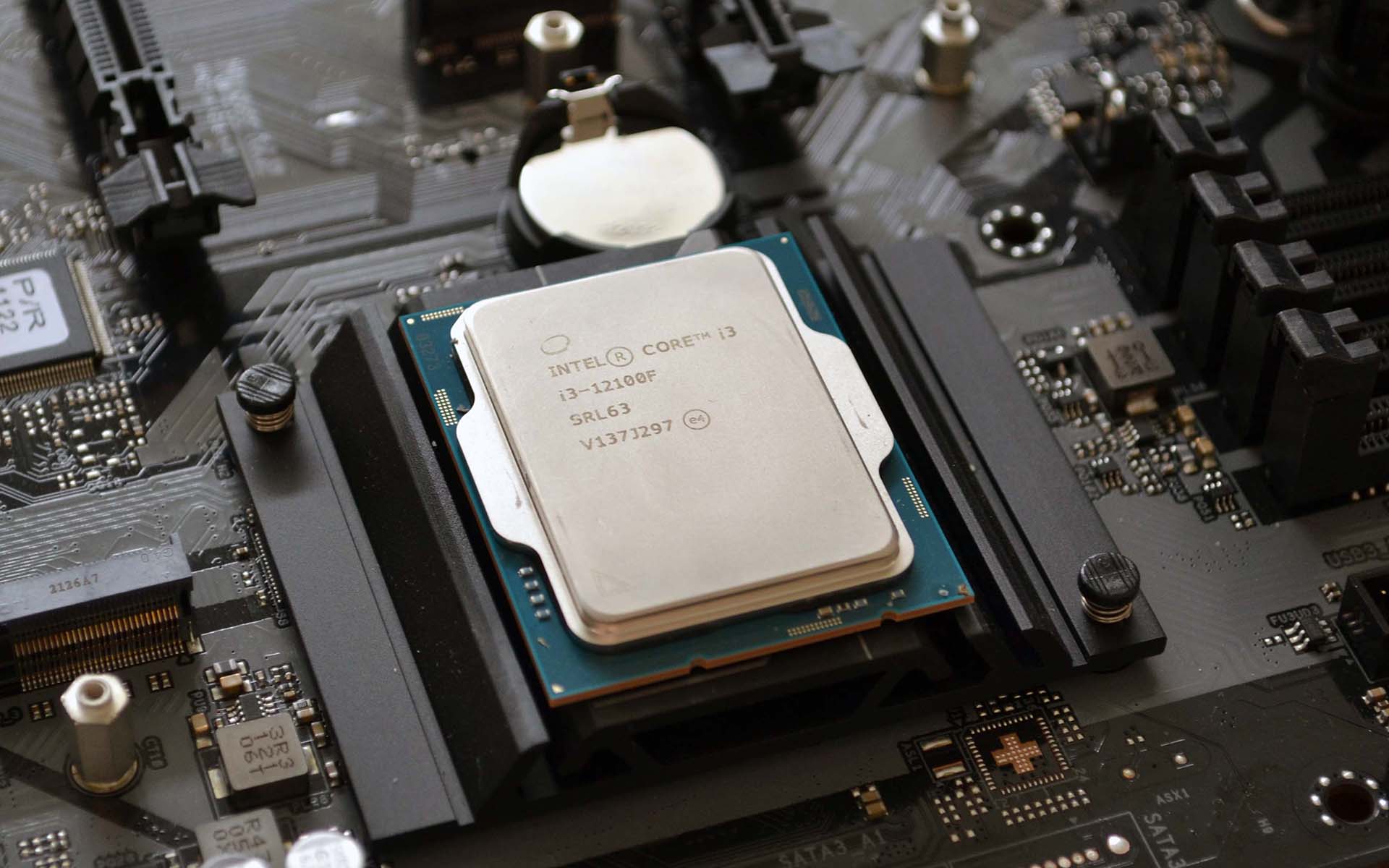 A right little belter, there are many good reasons to consider 12th Gen Core i3.

The latest Steam Hardware Survey paints a positive picture for Intel. Hit hard by the emergence and strength of AMD Ryzen over the last five years, and beset by manufacturing delays which have slowed transition from one process node to the next, Team Blue still holds a commanding 69 per cent market share.

Launched in November 2021 and supplemented this January, 12th Gen Core Alder Lake processors do well against Ryzen peers. Spurred on by good availability across the entire stack, Intel is arguably in the strongest position with entry-level chips.

Reasoning is simple enough. Competitor AMD’s latest Zen 3 architecture currently spans from £230 Ryzen 5 5600X through to £650 Ryzen 9 5950X. Mentioning price is important as any processor below 5600X is based on older technology and/or is hard to find in stock. Examining how this has come to pass is an interesting exercise, and can be explained by AMD’s recent strategy of focussing on laptop processors, which comes at the direct expense of a more expansive Zen 3 desktop line-up.

The large-volume £100-£250 area, bereft of serious AMD mojo, is fertile ground for Intel’s latest Core i3 desktop processors. Five were debuted during the January rush – of which three are standard-power parts – and, on the face of it, make for compelling solutions ensconced within a cutting-edge mainstream build. Let’s peer closer at the composition of our review Core i3-12100F.

It’s worth understanding the architecture behind Alder Lake first. Balancing out usefulness in smaller dies, Intel eschews energy-efficient Gracemont cores and opts for performance Golden Cove alone. The latest i3s keep to the four-core, eight-thread structure of the 10th Generation – remember, there were no desktop 11th Gen Core i3s – but improve performance by adopting a more powerful design.

Moving on over to what the company terms as Intel 7 process enables performance-helping cache to be added, too, and Core i3s now carry a total 17MB of combined L2 and L3, compared with just 9MB for the best of 10th Gen. In other words, there is now a substantially larger buffer between execution cores and system memory… and that’s a good thing.

Differences between the trio are minimal. Core i3-12300 ups the maximum turbo speed to 4.4GHz whilst the Core i3-12100F matches the regular 12100 but doesn’t carry integrated graphics. Handy for PCs that use a dedicated graphics card, Core i3-12100F is made noteworthy by virtue of aggressive sub-$100 pricing.

Punters need to invest in a new motherboard as all 12th Gen Core processors harness a recently introduced LGA 1700 socket. Ideally paired with either B660 or H610 chipsets, preferably with boards utilising widely available, cheaper DDR4 memory, it’s possible to build out a Core i3-12100F barebones for around £300.

The value proposition is persuasive because the review chip is packaged with a cooler in the box. We plan to evaluate its credentials separately, but know the Laminar RM1 is designed for 65W chips, making it perfectly serviceable for the Core i3-12100F’s base 60W TDP.

Speaking of which, Intel persists with two power ratings known as base and maximum power. The former is how the chip behaves when installed without any tinkering on the user’s part, and is configured in this 60W profile for bulk-volume OEM systems. The second is an optional higher-wattage tariff which enables the chip to maintain an enhanced all-core frequency, though sufficient cooling needs to be in place.

We observed minor performance differences between base and maximum power configurations. This is because the chip runs eight threads at an average 4.1GHz when in the default mode. Increasing power to 89W, or maximum in Intel speak, offers an extra 50MHz on top, rendering it mostly pointless whilst placing the capability of the supplied heatsink in thermal jeopardy.

A lack of high-end speed counts against the Core i3-12100F to some degree. Nevertheless, it’s instructive to see how Intel Golden Cove compares against AMD Zen 2 on an equal core-and-thread footing.

A 4.3GHz maximum clock does little to dampen single-thread performance. That’s the power of Golden Cove right there.

Keyshot performance rises in linear fashion and continues to paint the Core i3-12100F in a good light.

Using an ASRock B660 Pro RS motherboard and DDR4 memory works well for latency but not for sheer bandwidth. Our previous examinations of DDR5 vs. DDR4 show the latter to still be a great choice for most applications.

Do remember the Core i3-12100F is a £100 chip; it comfortably holds it own against much dearer competition for everyday tasks.

Wondered if four cores and eight threads are enough for gaming in 2022? On the evidence of our results, we’d have to say yes.

Part of Core i3-12100F’s success rests with using low-latency DDR4 memory. Though expensive it is still of relative value compared to any assortment of DDR5. We believe you’d be silly for using this chip with new-fangled memory, unless the plan is to upgrade to a Core i9 in the near future.

This value rating is calculated by taking in the all-core Cinebench R23 score and dividing by the dollar price. Scoring almost 8,500 marks and imbued with a $97 SEP makes the Core i3-12100F a class-leading champion. Nothing else comes close, and it’s interesting to note that four of the top five processors are from the Alder Lake range. Intel has pricing spot-on.

Efficiency is calculated by taking the same multi-core score and dividing by system-wide power consumption. Chips with great core density always win out for obvious reasons. That said, Core i3-12100F does rather well for a 4C8T offering.

Equipped with the latest performance architecture and bringing to bear four cores and eight threads humming along at thoroughly reasonable speeds, the Intel Core i3-12100F is an instantly likeable £100 processor.

Its arrival is all the timelier as rival AMD has little in the way of competition at this price point. Solid performance for everyday tasks and absolutely competent for gaming, it asks the question why a large swathe of PC builders need more Core?

Combining the review processor with an Intel B660 motherboard and DDR4 memory ought to cost £300. Of course, being an F-suffixed part means no integrated graphics, and GPU stock constraint is likely to cause issues when contemplating brand-new builds.

If you’re coming from an older system and don’t mind reusing a graphics card, we can see plenty of merit in opting for a Core i3-based 12th Gen platform. A sure-fire winner that AMD will find hard to combat, Intel has plenty of reasons to be happy about how well desktop Alder Lake is shaping up.

Verdict: a fine choice for a low-cost gaming build in 2022.

No IGP may cause issues

Intel opts out of Optane in $559 million write-off